The Acronym SSH stands for Secure Shell Host. There are a couple of ways that you can access most systems. The most common way is to use a telnet program such as the one called telnet (for Unix and Windows). Accessing a shell account in this fashion though poses a danger in that everything that you do over that telnet session is visible in plain text on your local network, and the local network of the machine you are connecting to.

As one solution SSH was created to encrypt the data being sent over the network as well as provide an option that prevents passwords from being ever passed over the network. SSH can use several different forms of encryption, anywhere from 56 to 1024 bit. SSH has been ported to Operating Systems on several platforms including Linux, Microsoft Windows and Macintosh.

What Is SSH Tunneling?

SSH can be used to encrypt communications between SQLyog and your remote MySQL server. This is known as SSH tunneling and is actually quite simple to use.

Setting up SQLyog for SSH Tunneling 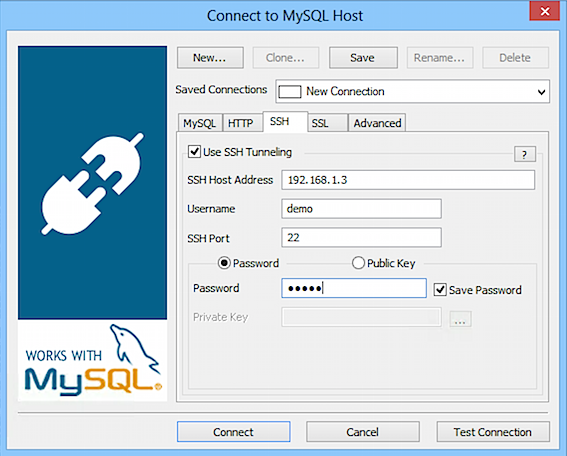 To understand the setup better, let us connect to a MySQL server using a real life example.E.g. Your website is hosted on 234.56.65.78. This server also has SSH server running and listening on port 22. Your MySQL server is located on server 234.56.65.79. This machine only allows connection from localhost or machine within the same network (e.g. 234.56.65.78). You publish your website on 234.56.65.78 using the username and password provided by your ISP. Ex. the username and password provided is ssh_user and ssh_pwd respectively.

In this particular case you have to put in the following value for various options:


The  public/private key authentication adds an additional layer of security. If you check this option you must still provide a password (what is now named a 'passphrase') and you must enter the path and name of the file that contains your private key. To have your account set up for public/private key authentication you should contact your System Administrator. Key files to be used with SQLyog must be in .ppk -format (same format as used by the SSH shell program 'Putty').

Note:This feature is available in SQLyog Professional, Enterprise and Ultimate.